I’m injured.  I’m lying on the couch, trying not to move.  Cursing the day they invented the LEGO brick.  Well, actually, I’m cursing my stupidity in lifting 9,000 LEGO bricks with my back, instead of my legs.  So, other than lifting too many of them, can LEGO bricks really hurt anyone?  Here is a list of dangerous practices that I have seen through my work with LEGO bricks after school.

A quick check on the Internet doesn’t reveal any deaths from LEGO bricks, though surely many kids do get them lodged in their throats, like this poor kid.  The first step towards prevention, and this may sound obvious, but don’t let your kids put LEGO parts in their mouths.  I know our dog likes to chew on them.  My, old-enough-to-know-better daughter has been caught with a mouthful bricks.  Sometimes both young and old, and furry, do stupid things.

The other source of real danger comes from using your teeth to break the bricks apart.  Not only could you succeed, and end up with spare bricks in your mouth (see above), but you could chip a tooth, too.  You can use a special tool (see picture), or try using a dull butter knife, plastic knife, or other bricks. The main problem seems to happen when people stack those flat plates together.  For full height bricks, popping the bricks off the bottom, instead of the top, can also help.  So, use a trick, or a tool, but not your teeth. 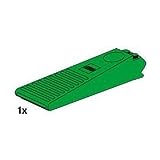 Gears, especially those that are powered by a motor, can pinch fingers and pull hair.  It might be a good idea to force long-haired people to tie it back.  I’ve heard a pinched finger can be painful, and tying hair back can be good practice for later in life.  As gruesome as it sounds, long hair has caused fatalities in machine shops.

Spinning bricks in the face!  I’ve only seen this while working with motorized sets.  When the kids make something spin, like wheels or arms, they immediately want to show friends.  Kids seem to have a inherent desire to shove things that spin into their friend’s face.  Like, “Look at this…real close!”

Flying bricks to the eye.  This next threat comes from flying bricks.  This either happens when they are thrown across the room, or from kids whacking their creations against the table to break them apart, and thus sending an explosion of bricks across the room.  Some LEGO sets have actual projectiles.  So, don’t throw bricks, don’t whack them, and don’t fire them.

Loose bricks on the floor poses the obvious threat to bare feet, but you can (I think), also slip on them, too.  In a classroom environment, loose bricks can be immediately picked up.  A rimmed tray, like a cafeteria tray can keep at least most of the bricks in one place.  I’ve found the trays keep sprawl, even if not eliminated, greatly reduced.  A tray also has helps when kids are building on a carpeted area.  Keep those bricks out from underfoot.

Stay safe out there!  Go out of your way to avoid the big risks, like choking, eye damage and tooth damage.  Kids always think of new and creative ways to hurt themselves, but awareness and common sense are our best methods for avoiding these risks.