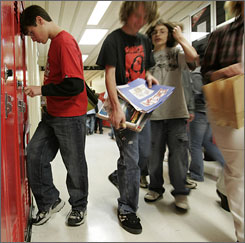 This weekend, we had the opportunity to share our concept with a middle school teacher (who also happens to be my cousin). As we spoke to her, we realized that our dream to reach kids from K-12 might be a little harder than we first thought. The problem? How to appeal to the pre-teen.

It’s actually pretty easy to interest younger kids in legos and robots. Our 7-year-old son and 3-year-old daughter both find legos endlessly fascinating. And our son is quickly discovering robots and is developing a real fascination for them. But when you get to middle school, I think kids become consumed by insecurity as their bodies change and hormones rage…and this insecurity leads to an intense pressure to be cool. Now, it’s not that robots and legos aren’t cool in their own way, but somehow they are in a different league from the latest Disney heartthrob or sillybands.

So how do we appeal to the junior high set? We have at least two approaches. First, we could just keep a traditional program at an age-appropriate level and know that a certain small subset of kids will self-select in. But somehow to me that feels unsatisfying. If our goal is to expand these concepts to a broader group of kids, creating a program that only appeals to kids who might end up as scientists and engineers anyway seems like it defeats the point.

Our second approach would be to find a way to appeal more directly to the cool factor that is so important to many kids this age. Having not discovered the secret to coolness in middle school myself, I’m not sure I’m better positioned to do so now that I’m older. But I wonder if there aren’t ways to do this…can we, for instance, somehow combine social networking with some type of engineering? Or can we look at people kids might admire, like astronauts or even people like Steve Jobs, the CEO of Apple, and think about how we can relate what they do to engineering concepts.

And yes, JJ, this may mean that not everything is about robots. But that’s okay, right?

Earn $75 Credit
Our students are responsible for our success and we would like to share that with you! Take advantage of our new referral program. Bring a friend that is new to Ascendly and we will credit you $75 toward your classes. When your friend registers, have them enter your name in the “How you heard about us” field and once they have paid and started their class, we will refund $75 of your tuition. Bring multiple friends and we will credit any money beyond your current tuition toward future classes.

Stay informed – you can sign up for our occasional newsletter. Learn about upcoming camps, classes, and activities.